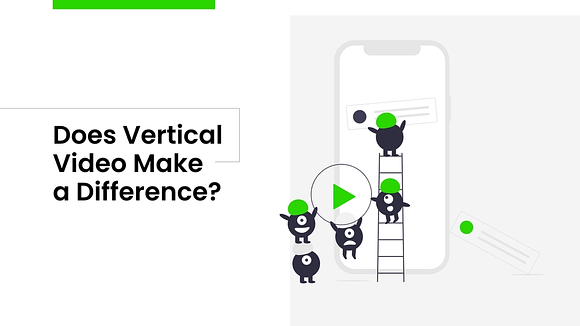 Over the last 70 years, video advertising has evolved from grainy black and white commercials, coming through the ‘80s when the iconic Apple commercial for Super Bowl changed the trajectory of video marketing, to the ’90s when the internet boomed, creating more digital opportunities for marketers, and then the advent of social media, especially YouTube, that brands that adapted the ‘digital’ fast enough, could cash upon. For example, there was Nike, which became one of the first brands to hit a million viewers on YouTube. As mobile data usage continues to break new records, and social media users are found spending more time on mobile devices vis-a-vis desktops, marketers realize the future of visual storytelling is vertical video.

In the initial days of social media, when the common and more acceptable format of video storytelling was the landscape mode, since the videos were being viewed on desktops and laptops, vertical videos would be frowned upon. Social media platforms would render them with black borders. But those days are behind us. Social media platforms are quickly embracing vertical video format, integrating them into a seamless experience and pushing users to leverage the ‘story’ mode of sharing vertical video content.

Today it is known that 57% of video plays come from mobile devices. Which means most of the visual content being consumed is through mobile devices and this is only going to grow. Of this, most of the usage is via social media. So it is a good idea to be ahead of the game, make vertical video ad experience better for this increasing target audience. Additionally, statistics support the fact that most people are lazy to flip their phones sideways, which means, if as a digital marketer you have not moved to vertical videos, you are losing your audience. Social media apps are adapting and embracing vertical video format for the same reason. Remember IGTV?

Where is most video content being consumed and where is the future of digital video advertising taking us? It is on the smart phones!

Here we have some interesting numbers to convince digital marketers about a visible change of location, that is, WHERE content is being accessed is changing. For example, if most of the internet traffic has moved to smartphones and you are still making video ads customized for PCs, you are likely to lose out on a considerable and growing chunk of the audience that has already migrated. According to Stastica, the number of mobile video viewers in US alone has jumped from 125 million in 2014 to 170 million in 2018 and is likely to cross 180 million by 2020. Smartphone traffic will exceed PC traffic by 2021. Another report brought out by Cisco, Cisco Visual Networking Index: Forecast and Methodology, 2016–2021, presented some interesting insights that indicate that digital content is most likely to be concentrated in the mobile space.ther things.

This understanding is important for those who craft digital campaigns. Once social media sites have adapted to vertical video format and enhanced it for an immersive experience for the user, ones who stand to gain the most from it is digital marketing companies making vertical ad video campaigns. This is because these campaigns are likely to have a higher completion rate and a larger pie of the consumer’s attention because of the smoother experience, making it a more effective tool for carrying the brand messaging across. In 2015, Snapchat shared that full screen vertical videos had 90% more completion rates than horizontal ones. Research further shows that visual attention for vertical video ads is twice as higher than in other formats.

Where should you be as a publisher of vertical videos?

Here is a quick lowdown on the various sites and how they are using vertical videos for audience engagement:

There is a good reason why social media sites are adapting vertical video.

Consumers are too lazy to flip their phones sideways

The social media apps on the mobile are designed keeping in mind consumer’s tendency to hold the device vertically. As a campaign designer, your job is to be aware of this human behavior, while creating video ads. Horizontal ads created for mobile devices where people are consuming information vertically most of the time, can be disadvantageous since people are unlikely to flip their phones and tap to watch them on full screen for a few seconds advert unless it is extraordinarily engaging.  The Mobile Overview Report in 2014 found, smartphone users hold their phones vertically about 94% of the time. This is to do with the fact that, very basic functions of a phone-calling and receiving phone calls or text-are performed vertically. So that is what we are most used to. But we have always historically watched videos in the form of films and TC shows or even music videos. Then came the age of mobile data, where now we were forced to flip the phone to watch videos that were shot in landscape mode. So as consumers switch to smartphones to devour content vertically for longer periods of time, it makes more sense to have them play videos vertically too, for higher attention.

There is enough merit and also the first mover’s advantage in incorporating vertical videos as part of your digital campaigns at this point. As video becomes the king of content and low cost technology makes smartphones cheaper and more widely affordable, social media marketing strategies will need to incorporate video storytelling in a way (ideally vertically) that is easy on the eye and immersive, to increase completion rates and have higher visual attention. At the end of the day, you want people to remember your brand and your brand’s story.

Superstitions Cease, SEO is Not Dead! How Do You Prepare for 2021?

Role of AI and ML in Modern Marketing

7 reasons why Digital Marketing is essential for start-ups?